Drama, documentaries, comedies. Rock, alternative, indie, hard rock, electro-pop, progressive. I have a very extensive collection of music and movies. I have almost 1200 CD's, 18000 songs according to iTunes (some are duplicates); doesn't include many albums in my collection; which were not ripped to my computer, 700 DVD's, 150 tv series box sets.


While I am a huge fan of hunter s thompson and the book, I was very excited for the movie. I very much appreciate johnny depp taking the time and money to put this film together. I really feel a little disappointed by the film, I'd still rate it a weak b- but feel hunters writing is not as well portrayed like it was in fear and loathing. While johnny depp and giovani ribisi really carry the movie and both give stellar performances I was let down by the film ability to captivate the story. Worth checking out when it comes to dvd!

Casino Jack and the United States of Money (2010) review


Another great film by alex gibney, he really has mastered the art of documentary film making. Just as his previous work displays a very complex story told brilliantly piece by piece. is able to give the audience a great understanding of the motives which lead to a unreasonable true story! Must see!


This film was not all it was cracked up to be. I felt it was quite a disappointment. I have no clue how in world this was nominated for best picture and even less how it won. The acting was decent, the story and the way events were played out less than interesting. Certainly one you could miss.


One of the greatest films of the year. This movie is simply poetic. This movie has really cool looked. I found my self laughing out loud more than I should of. James franco is the star of the movie, delivering his best comedic performance to date. Beware that viewers should be ready for a ride. This is not your typical movie with a plot line, hero, villain. It does not try to be anything its not. The cast is great and I found the screen hard to take my eyes off of. A must watch for any fan of film who likes unusual films. Great time!


The Birthday Massacre latest release "Hide and Seek" is another successful album release. I have to admit that I was introduced to this band in early 2012. A little late to the party, but they quickly became one of my favorites. I was very excited to learn of this albums release. Anyone who has been a fan of this band previous releases will not be disappointed. "Hide and Seek" carries on the vibe of "Walking With Strangers." The highlights are "Down", "Need", "Alibis", and "One Promise." One of the top rock releases of 2012!


After a long wait for the new album it has finally arrived. I was curious to hear the direction Paramore would be heading on their latest effort. While it may not have the impact of their previous work, it still is a decent record. This latest album may be missing some of the alternative rock sound and replaced it with pop-rock. I would rate the music around a b- and the lyrics around a c-, although Hayley's voice and vocal patterns make up for some of the imperfections. It feels very polished and produced almost too much, which seems stale at times. For the fans who are expecting "All We Know Is Falling" or "Riot" type records I think you will be a little disappointed. Those who appreciate an album redefining the idea of what Paramore's music means. This will be an alright record to check out. Personally I feel this album will be worth playing for a month or two but won't be replayed very frequently after. "Fast In My Car", "Now", "Ain't It Fun", and "Still In To You" are the highlights of the album.


This band I had first heard about when they preformed on last call. After listening to "A Balloon Called Moaning" I decided to check out the Big Roar. I was very impressed with their sound and how much I liked this album. They have a very alternative rock sound. From the first track "The Ever Changing Spectrum of a Lie", the album captures you. I would strongly recommend this to any alternative rock fan as a great album. Can't wait to see what they do next!


Let me start by saying, I'm a long time Tegan and Sara fan. It would be fair to say that Heartthrob is my least favorite of their albums to date. I have no issues against their choice to go from indie alternative to electro-pop rock. I quite enjoy an artist who is willing to pursue various genre of music. "Heartthrob" falls short for me on track 4,5,6 and the first single "closer" didn't do it for me. On the positive side, "I was a fool" and "I couldn't be your friend" are the best songs on the album. "Goodbye, Goodbye" and "Love they Say" are worth highlighting as well. "I was a fool" very easily would make my top 10 best Tegan and Sara track playlist. I feel the album is missing some of the key elements that I love from a T & S record. I would rate the music around a b-, the lyrics a c+, the vocal elements b+. The best way I can say it is this album doesn't excite me the way previous releases have. The album sounds very over-produced, the tracks blend together and are a little dull. The biggest problem I have had with this album is wanting to be in love with it and not being able to. I have nothing but great admiration, respect and support for Tegan and Sara as artists and musicians. In no way does this album change the way I feel about them. I would still be thrilled to go see them play live. I really would love to hear them convert these songs to an acoustic set. Still looking forward to all the great things to come from this band.


Koi No Yokan proves the Deftones continue to be successful at creating great music. For anyone who has been a long time fan of the Deftones previous work, this album falls right in line with their previous releases. This album stands out as not only a great Deftones album, but one of the best hard rock releases of 2012. The albums catches you right from the very opening chords of Swerve City and doesn't let you down until the album is over. While there really isn't a track worth not listening to on the album, I would strongly recommend "Leathers", "Poltergeist", "Gauze" and "Rosemary" as the best of the best. Certainly for anyone who is a fan of hard rock music, this should be an essential addition to your collection.


A refreshing album from the electronic-pop group Ladytron. The fifth release, "Gravity The Seducer" successfully expands their music to new places. For those who are fans of the bands previous work, you will not be disappointed. The album's highlights are "White Elephant", "Mirage", "Ace of Hz", "Moon Palace", and "Melting Ice." I would rate this album an A+. There is just something addictive about this record, give it a few listens and you'll be hooked.

Fnord Prefect
Posted: 8 years, 6 months ago at Oct 23 13:14
Thanks for the Alyson Hannigan picture vote!

Meganfan
Posted: 8 years, 9 months ago at Jul 23 11:09
this fashion style never get outdated..i.e.pinup style..
www.listal.com/list/sxy-pinup-girls
hope you enjoy the list 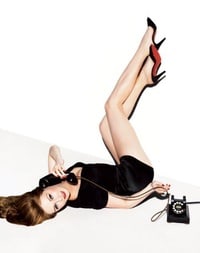